The story has been told of a retired judge who spent an unbelievable seven years in Boko Haram captivity. 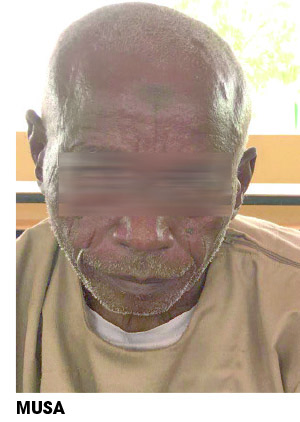 Alkali Musa, is 78, years old. He is no doubt the oldest man among the 680, repentant terrorists undergoing rehabilitation and de-radicalization at the Operation Safe Corridor rehabilitation camp at Malam Sidi, in Gombe state.


He is a retired civil servant. During his years of service, he worked as a judge under the Borno State Ministry of Justice, Maiduguri, where he served over 30 years before retiring from service on June 1, 2012. Upon retirement, he decided to relocate to his village having spent all his life in the city. That perhaps was the greatest mistake he made in his life.

He had barley spent one year in the village when the Boko Haram terrorists struck and abducted him and many other villagers including his son and took them into the bush.

In this interview with Saturday Sun, the retired judge though well educated and speaks fluent English spoke in Kanuri language through an interpreter whom he corrected severally for giving a wrong interpretation of what he had told the interpreter who is a staff of the camp.

Life in the bush was hell he told this reporter. He also said life in the village after his relocation was not as pleasant as he had expected it to be as fellow villagers accused him to be a member of the Boko Haram sect and destroyed most of his property he spent his hard earned money to build. They also destroyed three of his vehicles and made him miserable until he was eventually abducted on July 15, in 2013, and taken into the bush. He spent about seven years with the terrorists before he breathed air of freedom and surrendered to the Nigerian troops who were on patrol in the area. And today, even though he is glad to be free from the terrorists’ enclave, he is not a very happy man because he has lost virtually everything he worked in life and has become a high blood pressure patient. He tells his story in this question and answer session with him.

Can we meet you sir?
My name is Alkali Musa, and I am 78 years old

What is your occupation?
I am a retired civil servant. I worked under the judiciary with the Borno State Ministry Of Justice.

Where are you from?
I am from Moduri village under Guzamala local government area of Borno State.

How did you become a Boko Haram member?
I did not join the Boko Haram group, I was abducted by the terrorists when they attacked our village on July 15, in 2013.

What were you doing before you were abducted?
I was retired and spending my retirement in the village at the time. I retired on June 1, 2012.

Tell us the story of how you were abducted
Upon my retirement, I migrated from Maiduguri to Banki. From Banki, I relocated to another small village near Cameroon called Amdachi, that was where I was abducted and taken into the bush. When they abducted me, I could not even walk but they told me they would kill me if I don’t walk fast with them.

What was your job description while in the bush with the terrorists?
I refused to carry out any of their tasks because I don’t like their way of life.

What about your son, what was his job description?
It was same person who abducted me that abducted my son on the same day in the house.

What was life like in the bush?
Life in the bush is nothing to write home about and cannot be compared with anything. So while there, I kept myself busy reading the Quran regularly. Besides, the person who abducted me is one of the high ranking members of the Boko Haram terrorists; a General within the sect. So, because of the fear they had for him, they hardly give me orders like they do to other people.  Besides, I had access to him so nobody treated me anyhow or forced me to do what they want because of the position of the person that brought me into the bush.

And I never accepted their doctrine because of how they go about their way of life. So all I was doing was keep reading the Quran and praying regularly. And to think of the general belief that these people are fighting the course of Islam, the story is not true. They don’t even follow me to pray because they know they are not doing the right thing. They took five of my sons and now I don’t know whether they are alive or living because I have not heard from them and nobody has heard about them. My only surviving son is this one with me in the camp and the General that abducted them is now at Giwa barracks. The Nigerian soldiers captured him.

Why didn’t you believe in the Boko Haram doctrine?
I did not accept their sect or believe in their doctrine because they forced me to retire early from service.

How?
It was after I left Maiduguri and went to Banki, from there they met me and forced me to retire from my job. After I left, the Civilian Joint Task Force went and burnt my house. They also destroyed houses of other people and took three of my vehicles, one Mercedes Benz, 230 V-Booth, one Honda car, and a Peugeot car.

Why?
Because they said I am father of Boko Haram

When did this happen?
All these happened while I was abducted and taken into the bush.

How did you feel while you were in the bush?
I was always having high blood pressure because of thinking. I was thinking too much about my life, my family and everything that I had worked for. I was always very miserable, I was never happy. How can anyone be happy being at a place where he is not supposed to be and doing things that you have never done in your life especially at my age. Up till this moment, I suffer hypertension because of the experience I was subjected to in the bush. I lost my family, I lost my house, I lost my sons, I lost my vehicles, I lost my pension salaries, I lost everything.

What about your wife?
My wife is now in Maiduguri and shevisited me here at the camp two weeks ago or so. And I was seeing her for the first time after seven years.

How was she when she visited?
Well, she was okay from the looks on her face.

How many wives do you have?
I have just one wife.

Is this your son who was captured along with your last child?
No, he is not
***
Source: Sun News
Posted by makarella at 11:17 AM