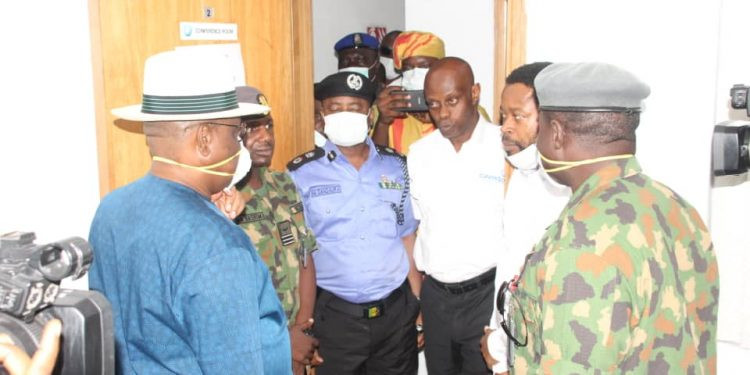 The Rivers State Police Command has confirmed the arrest of two pilots who violated the lockdown order in Rivers state, by flying in expatriates into the South-South state.

The Caverton pilots were arrested after Governor Nyesom Wike led security operatives to the operational base of the airline in the state.

LIB reported earlier that the Rivers state Governor had demanded for the identities of the foreigners flown into the state, and for medical test to be conducted on them.

Rivers Police Commissioner, Mustapha Dandaura who confirmed the arrest of the pilots said;

“Recall that when this coronavirus issues started, there was ban of local flight from coming into the State. Since that time we have been monitoring the activities of these private airlines.
“To our surprise, we received an intelligence report that an aircraft has landed at the Airforce base and that it was carrying some passengers. We have apprehended the Pilot and the Co-pilot by the NAF commander that’s why they alerted the chief executive Governor of the state who had given an order that on no account should any aircraft land on Rivers State without clearance.
“We don’t know the people they brought. Whether they are positive or negative of Coronavirus. Where are the heading to and where they came from.
“To our surprise this morning this aircraft landed without any signal or permission from the authorities. We don’t know their mission here. Maybe they are coming here to sabotage the activities of the state and the security agencies that are putting efforts on ground to ensure that Rivers State enjoy peaceful atmosphere throughout this pandemic period”.

Governor Nyesom Wike also expressed willingness to testify against persons violating the state’s border closure, which is one the measures his administration instituted to curb the spread of Coronavirus.

“I am willing to drop my immunity as a governor as far as this case is concerned . I am ready to be a prosecution witness.
“I want to say this is a serious matter to us and police should handle it seriously. That’s why I am here at the state command to show the seriousness of this issue.
“No body says that you can’t go to any state but now we are in a war situation. This Covid-19 is even worse than a conventional war. We want to know who are those people you brought in, so that we have to trace them to know their identity and status. Luckily we have seen the pilot and the Co-pilot. They will assist the police to assist in identifying them”.

Governor Wike who wondered why the management of Caverton decided to cut corners in flying in expatriates into the state, stated that the state government has the right to check those coming into the state in order to ascertain their status.

“I have always said that we need the support of everybody. Nobody knows the status of those coming into Port Harcourt. Nobody knows whether they are positive or negative. I have said before that I don’t have right to close the airport. But I have the right of saying don’t enter my state because we want to know your status.
“The company wrote to us about bringing people which I forwarded to Commissioner of Police to perform security checks and the health officials to perform their duties before allowing them to come in. That is for those performing essential duties. But they decided to violate the regulations.”

Posted by makarella at 8:53 PM