A police officer has landed in serious trouble after extorting N40,000 from a motorist in Lagos. 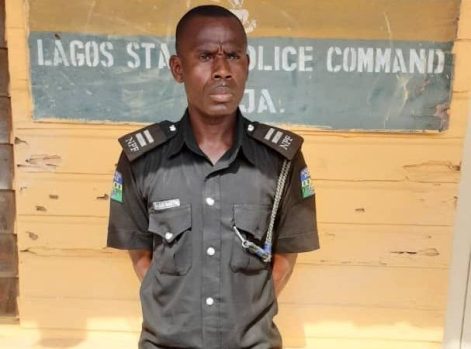 Taloju Martins
A police officer, Taloju Martins has been arrested after extorting N40,000 from a motorist in Lagos state.
Recall that the officer was captured in a video posted on Twitter on Saturday counting the money after extorting it from the motorist.
The police spokesperson in Lagos State, Bala Elkana, said in a statement on Sunday that the money was handed to the man by the Commissioner of Police, Lagos State, Hakeem Odumosu, on Sunday.
The police posted a photo on Twitter showing the man receiving the money.
It was gathered that the officer, Taloju Martins, alongside other police officers ‘arrested’ the unidentified victim and confiscated his car on Friday along Ago Palace Road, Okota, apparently for violating the Lagos State government stay-at-home order to halt the spread of the novel coronavirus.
He was allegedly forced to pay N40,000 before he could get back his car.
The inspector, said to be the station officer at the Ago police station, Okota, is seen in the video collecting wads of naira notes in N1,000 denomination, and counting them to confirm how much the money was.
The officer was arrested by the police on Saturday. He is to face an orderly room trial.
“The Commissioner of Police Lagos State, Hakeem Odumosu has ordered the Deputy Commissioner of Police in Charge of Criminal Investigation to carry out an in-depth investigation into the activities of Ago Police Station as a whole,” said Mr Elkana, a deputy superintendent of police.

“Commissioner of Police has reaffirmed his stance against corrupt practices and impunity. Members of the public will be updated on the outcome of the investigation.”
Posted by makarella at 2:03 PM