Hunger in the land has forced some Lagosians to protest in the streets over government's lockdown order. 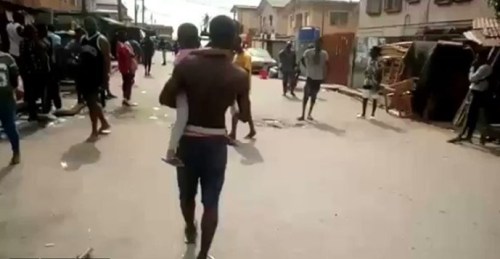 Lagos residents protest lockdown order due to hunger
Residents of Lagos state have taken to the streets to protest the lockdown order by the federal and state government.
The residents said that they do not have enough food that will sustain them till the next 2 weeks. They complained that they have not been paid and yet they are expected to stay at home.
Recall that Governor Babajide Sanwo-olu of Lagos state had on Tuesday, March 24, issued a sit-at-home order across the state to enable the government tackle further spread of coronavirus.
A week later, President Muhammadu Buhari in a nationwide broadcast, ordered a lockdown across Lagos, Abuja and Ogun states as part of measures to curb the disease. However, since the lockdown order by Buhari took effect on Monday, 30th March by 11pm, there have been many criticisms and outcries as citizens lambasted government for not providing palliatives to enable people cope during the shutdown.
With over a week into the initial lockdown, residents of Lagos state have taken to the streets to lament and even challenge members of the state’s task force.
In a video which has gone viral on social media, the residents stated that hunger and epileptic power supply makes it difficult for them to stay at home.
Watch video below:
Posted by makarella at 8:13 PM