A police officer has been given the fright of his life after a danfo driver sped off as he clinged on to the car's bonnet. 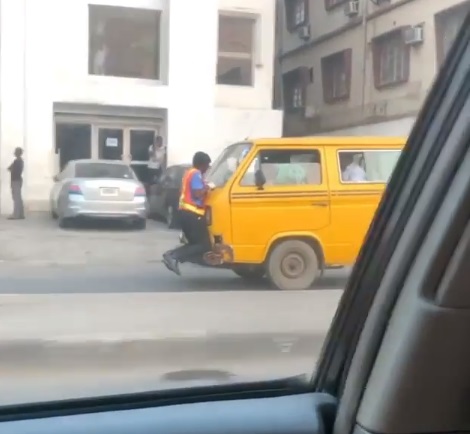 Policeman hangs on bus' bonnet after disagreement with driver
A disagreement between a policeman and a danfo driver has led to a most awkward scene in Sabo, Yaba area of Lagos state.
The policeman was spotted in a viral video clinging to the bonnet of a Danfo (commercial bus) after its driver sped off after a disagreement.
Instagram user @thealphaleke who shared the video, wrote:
Earlier today in sabo, yaba; what do you think happens when you refuse pay for officer’s lunch?
Me I’m just saying oh... who knows, that asshole might actually committed a traffic offense
Here is the video below:
Posted by makarella at 4:17 PM