The governor of Adamawa state, Ahmadu Fintiri has reportedly sacked as many as 5,000 workers in the state. 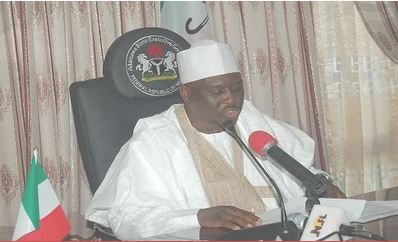 Ahmadu Fintiri
Governor Ahmadu Fintiri of Adamawa State has approved the sacking of 5,000 workers employed by the previous All -Progressives Congress-led government of Jibril Bindow.


The salaries of the civil servants had been stopped last year over what the state government called “improper employment and transfer of service.”

The fate of the civil servants was finally sealed as the state executive council endorsed the report of a committee the government had asked to regularise employment and transfer of service in the state.

On Wednesday, the state’s commissioner of information and strategy, Umar Pella, announced their sack after a meeting of the state executive council at the Government House, Yola.

Mr Pella advised those employed between September 2018 and May 2019 to seek fresh employment, saying the government no longer recognise them as its employees.

Mr Pella said the report of the committee shows that there were irregularities in their employment process.

“If you know you are in Adamawa and you are employed between September 2018 and May 2019, we are of the opinion that that period, a lot of irregularities took place and that the council today based on the recommendations of the committee which made available the report to us and upon which the white paper was based, it is confirmed that the employment at that period did not follow due process and the advice is that they should seek fresh employment.

“We will ensure that regular processes are followed which is in line with the rules so that we can employ them and regularise the process,” he said.

A week after his inauguration, Governor Fintiri had dissolved the boards of parastatals and state-owned tertiary institutions. He also nullified last minutes appointments, recruitments and other “hasty decisions” of his predecessor.

He further suspended all appointments made on or after March 28, 2019 (governorship election day).

Reactions
Following the announcement, the government stopped the salaries of about 5,000 civil servants.

Months later, the government started issuing sack letters to the affected staff at the state-owned Polytechnic.

One of the affected civil servants, Faisal Baba, accused the state government of withholding their salaries for seven months and issuing them sack letters without justification.

He lamented the reluctance of the state House of Assembly, the organised labour and other relevant key stakeholders to prevail on the state government to rescind its decision.

Mr Baba said that the way the disengagement was carried out showed that it was based on political sentiments.

“Very soon, we will embark on protest and also seek redress in the court of law,” he said.
***
Source: PREMIUM TIMES
Posted by makarella at 12:43 PM