An Accident occurred in Ogun state when a truck lost control crushing someone dead and the rest severely injured. 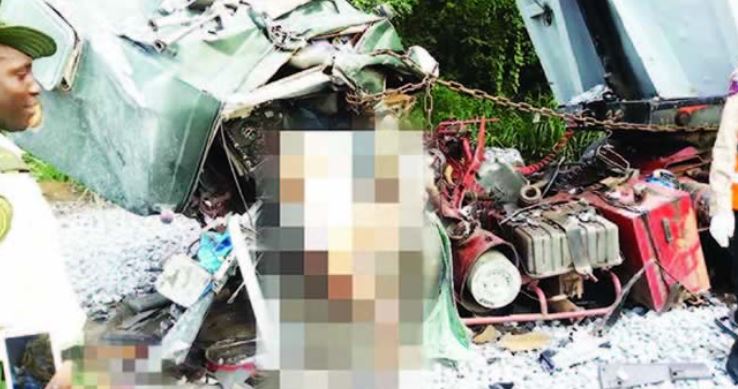 Scene of the incident

A truck has crushed one person to death and injured four others during multiple fatal accidents at Sango tollgate on the Lagos-Abeokuta Expressway in Ado-Odo/Ota Local Government Area of Ogun State.


The accidents, which involved five vehicles, including the truck and two motorcycles, occurred around 4:49 am on Tuesday when the brake of the truck failed.

The truck was said to have rammed into five vehicles and two motorcycles due to its brake failure.

Oladele said, "It was reported that the containerised truck had a brake failure and hit the other vehicles at the rear. The truck also ran into a group of commuters waiting to board commercial buses at the tollgate bus stop.

"It ended up crushing one person to death and injuring four persons, including two motorcyclists waiting for passengers."
He said the accidents affected vehicles with registration numbers Mack truck, AGL676CV; a yellow bus, BDG976XF; a white bus, YA226AAA; a yellow bus, GGE272XY; a car, KJA555XP; and two motorcycles - LAR355WM and TTD067UJ.

Oladele explained that the accidental vehicles had been removed from the road while the injured victims had been rushed to the state hospital in Ota.

According to him, the deceased has been taken to the state's morgue in Ifo.
Posted by makarella at 4:53 PM