The letter requested the DSS DG to “promptly forward all the case files” in respect of Omoyele Sowore to the office of the AGF and Minister of Justice. 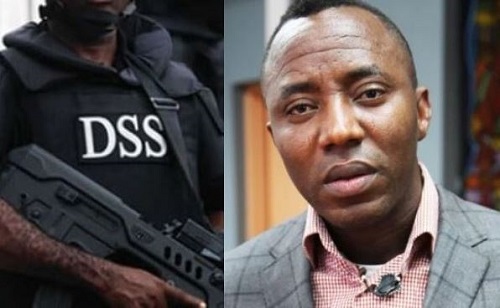 The Attorney-General of the Federation and Minister of Justice, Abubakar Malami, SAN, has ordered the Department of State Service, DSS, to hands-off the prosecution of detained pro-democracy activist and convener of RevolutionNow Protest, Omoyele Sowore.


The AGF, in a statement that was made available to newsmen by his media aide, Dr. Umar Gwandu, on Friday, said he directed the security agency to forward the case file in respect of charge pending against Sowore before the Federal High Court in Abuja, to his office.

Malami further directed the Federal Ministry of Justice to immediately takeover the prosecution of all charges against Sowore, in line with the provisions of Sections 150(1) and 174 (1) (a-c) of the 1999 Constitution (as amended).

He said the Federal Government was committed to respecting the sanctity of the rule of law, protecting the virtues of human rights and ensuring speedy dispensation of justice in the matter.

“As part of deliberate efforts to probe emerging issues related to the recent imbroglio related to Omoyele Sowore’s case and for speedy dispensation of justice, the Attorney-General and Minister of Justice has requested that the case file in respect of charge pending before the Federal High Court, Abuja be forwarded to his office”.

In the statement Dr. Gwandu said the request for the transfer of the case to the office of the AGF was contained in a letter dated December 11, 2019 and addressed to the Director General of the DSS, National Headquarters, Abuja.

The Solicitor General of the Federation and the Permanent Secretary, Federal Ministry of Justice, Dayo Apata, SAN, who signed the letter, refereed to an initial letter the DSS wrote to the AGF on September 9, 2019.

According to the statement, Apata’s letter to the secret service, read: “The Honourable Attorney-General of the Federation and Minister of Justice upon a further review of the case has directed the immediate takeover of the prosecution of all charges in respect of Omoyole Sowore by the Federal Ministry of Justice in line with the provisions of Sections 150(1) and 174 (1) (a-c) of the 1999 Constitution (as amended)”.
It said the letter requested the DSS DG to “promptly forward all the case files” in respect of Omoyele Sowore to the office of the AGF and Minister of Justice.

Sowore, who was the presidential candidate of African Action Congress, AAC, in the last general election and publisher of an online news outlet, Sahara Reporters, and his co-defendant, Olawale Bakare (aka Mandate), are answering to a seven-count treasonable felony charge.

They were in the charge marked FHC/ ABJ/CR/235/2019, accused of conspiracy, money laundering, cyber-stalking and insulting President Buhari.

Though the defendants perfected all the conditions the court gave for their bail, the DSS declined to release them, claiming that no surety came forward to receive them.

The agency subsequently re-arrested Sowore the next day within the court premises after his trial was adjourned till February 11, 2020.

Circumstances that surrounded the manner in which he was re-arrested, which involved the invasion of the courtroom by alleged operatives of the DSS, has continued to attract condemnation for the security agency.

Though DSS claimed that its officers were not involved in the court invasion saga, insisting that they waited and arrested Sowore outside the court premises, however, counsel to the defendants, Mr. Femi Falana, SAN, insisted that the agency was involved.

Malami earlier disclosed that the Federal Government had commenced its investigation into the matter.

Similarly, the Body of Senior Advocates of Nigeria, on Thursday, called for the setting up of an Independent Judicial Commission of Enquiry to unravel those behind the courtroom invasion.

Sowore was arrested on August 2 in Lagos and later transferred to Abuja for prosecution, after he called for a nationwide protest against perceived maladministration by the President Buhari-led government.

Despite his arrest, the protest held in various parts of the country on August 5, with security operatives clamping down on some of the participants.