Security operatives have nabbed a notorious killer and cultist in Lagos state. 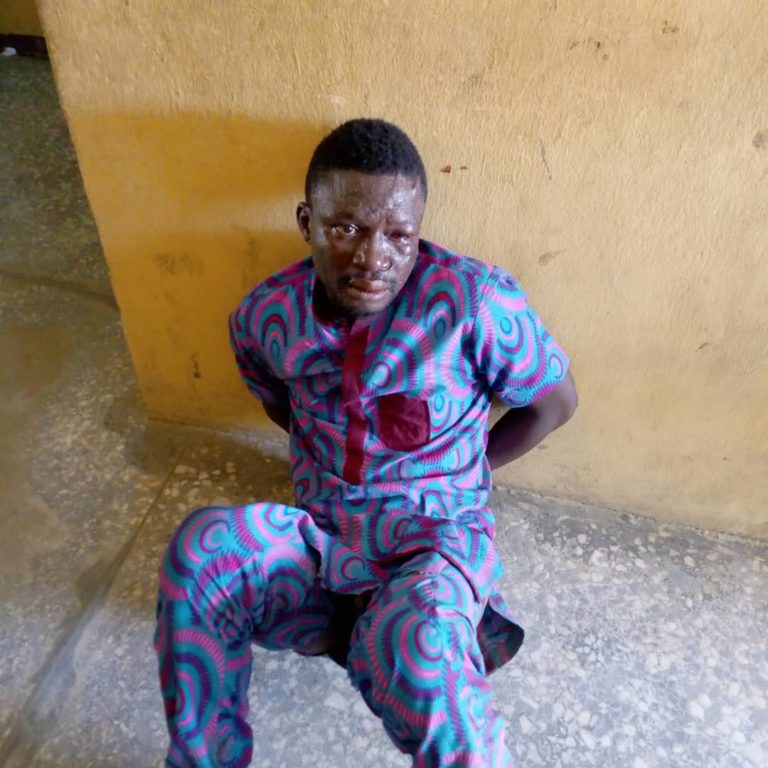 Adegboro Odunwole
Residents of Bariga area of Lagos were in joyful mood following the arrest of the most wanted suspected cultist and vicious killer, Adegboro Odunwole, popularly known as Gobe in the crime world, according to a report by PM Express.
It was gathered that residents were happy because the arrest, which they never thought will ever happen in the area, was diligently carried out by Police operatives.
It was gathered that Gobe was seen to be so powerful and invincible to the extent that he was dreaded for causing violence and killings in Bariga and its environs for a long time.
All the efforts made in the past to arrest Gobe failed and the residents concluded that he was invincible and above the law.
However, the invincibility and escapes ended on 1st November, 2019, at about 1400hours, when operatives of the Operation Crush from Bariga Division arrested him and chained his hands to avoid his perceived mysterious escape.
This was confirmed by the Police Public Relations Officer, DSP Bala Elkana, who said the suspect was in Police net undergoing interrogation.
He said that the Police, in intelligence led operation, arrested one Adegboro Odunwole alias Gobe, who is a Fractional leader of Aiye Confraternity in Bariga around Akilo Street, Bariga. The suspect had been on the watch list of the Command. He is alleged to be responsible for series of violent attacks and killings in Bariga.
Elkana said that the suspect will be charged to Court after the conclusion of investigation.
The era of Gobe and his gang may have come to end as he may be likely be charged for murder which attracts death sentence if he is tried and found guilty before Court for the alleged offence.
Posted by makarella at 9:58 AM