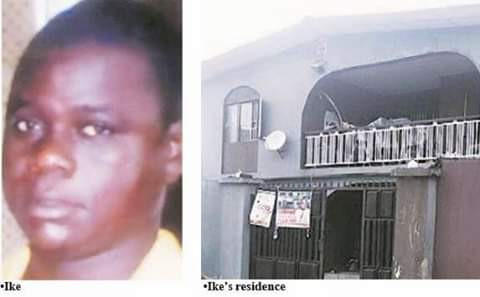 A woman, who recently gave birth has narrated how armed robbers killed her husband Ejike Ike in an attack at their Lagos home that lasted several hours on Friday.

It was gathered that the incident which occurred at 19, Sanni Labode Street, New Oko Oba, lasted between 2am and 4am. The armed men numbering about 10 and wearing black attires took their time moving from one room to the other stealing money, phones and other valuables.

According to residents, the hoodlums forced their way into the gated compound by using a sledgehammer to break the keys before entering Ike’s house from the backdoor. Ike was said to have been sleeping when the criminals entered his flat.

Speaking to The Nation, his widow said that she was the one who first noticed an intruder had gained access into their home and she alerted her husband.

“My husband sells gas. We were sleeping when I started hearing noise. I woke up to check and saw there was a man wearing black who has entered our house from the back door. I quickly alerted my husband that it was an armed robber and he woke up with sleepy eyes. No, he did not struggle with the man at all. As the man saw him, he shot him in the chest," she said.
“I was already hiding the children when I heard my husband scream that he has been shot in the chest. So, I rushed out and dragged him. We were running through the other door not knowing that there were other robbers by the gate. When we saw them, I ran to another direction and my husband followed another road but they caught him and were beating him. They led him back to the building. I was hiding until around 5am when I came out and I saw my husband lying face down in our house. That was when I shouted for help and our neighbours came out. We rushed him to P&G Hospital but they referred us to General Hospital. It was at the General Hospital that the police came and took him. I did not know my husband was dead by that time because I was telling the police that he should be in the hospital where they can take care of him and not at the police station.
"But they did not answer me. They told me to go home and later, they asked for my husband’s brother’s number which a neighbour gave them. It was when he came that I was later told my husband had died. This robbery lasted for many hours but police did not come. It was after the death that they later came to my house to see where the armed robbers entered from. It was later I learnt that they also attacked three flats in our compound and that they shot Mr. Ben in the stomach,” she said.

Asked if the robbers stole anything from their flat, Mrs. Ike said they took their phones and a cash sum of about N20,000 she kept in the house.

According to a resident, Dapo Idowu, the robbers also went away with a vehicle belonging to another neighbour.

Idowu lamented police inaction despite calls to the control room and text messages sent to the Divisional Police Officer (DPO) and Area G Commander.
Idowu said his house was attacked last month and that they did nothing even though they were contacted.
“We have realised that police cannot protect us and so, we have started discussing with Oodua People’s Congress (OPC) in order to have guards on this street.”The police command has assured the residents of their safety as security has been beefed up in the neighbourhood.

Police spokesman Bala Elkana, a Deputy Superintendent (DSP) said Commissioner Olusegun Odumosu has ordered deployment of more cops in the area to prevent recurrence.
“I called the DPO and he denied not responding to the distress. He said he got a call about an incident that Friday and deployed policemen to the scene. That notwithstanding, Police Commissioner has ordered that security be beefed up in the neighbourhood to prevent any such incident. The residents are assured of their safety and security.” he said.
Posted by makarella at 11:42 PM