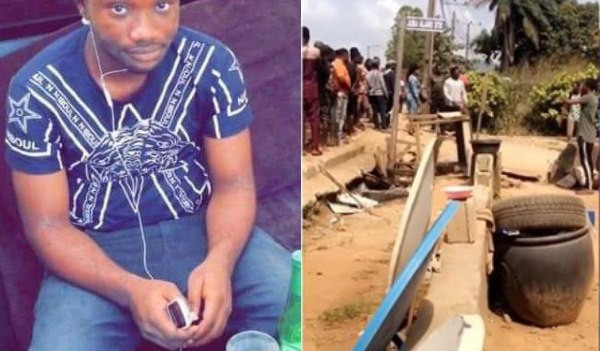 A tragic incident occurred at Juba Alaro Junction off Liasu road in Idimu area of Lagos on Monday November 25, as a tea vendor a.k.a Mai Shai's customer was stabbed to death following a heated argument over a N100 bread.

An eyewitness alleged that the deceased identified as Peter Nwala got into an argument with the tea vendor shortly after he turned up at his shop to buy fried egg, tea and bread. Peter reportedly refused paying for the bread which he claimed had a bitter taste.

The tea vendor who was angered by the deceased's refusal to pay for the bread, reported the incident to a nearby suya seller who stabbed him with a dagger.

‘’He paid for other food items except the bread. It was when he wanted to leave the place that the tea vendor signalled the nearby suya seller, who brought out a dagger and stabbed Peter to death.
‘’The police have contacted the leader of the Hausa community in the community and he has promised to produce the culprits" an eyewitness said.

A police source however told The Nation that the deceased was stabbed by the vendor in retaliation.

‘’The boy (deceased) was an alleged internet fraudster who had been arrested in the past by operatives of the Special Anti-Robbery Squad (SARS). He went to the tea vendor’s kiosk to buy fried egg and was said to have refused to pay the man.
‘’ He took a stick and hit the tea vendor who insisted he must pay for the food. When the tea vendor could no longer bear the brutality, he motioned to his colleague who took a knife and stabbed the boy(Nwala) in the back leading to his death a few hours later at a hospital.
‘’Friends of the deceased then launched into violent attacks on Hausa traders in the neighbourhood but we quickly deployed our men there and restored normalcy. However, we are still looking for those who killed the boy and the police is engaging the leadership of the Hausa community in the area to ensure that peace reign and apprehend the culprits,’’ he added.

Posted by makarella at 9:40 PM