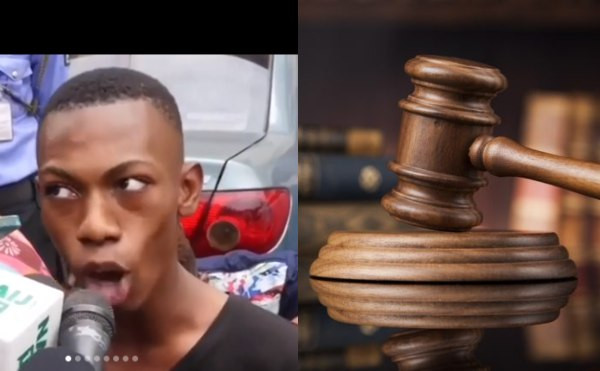 James Brown who became an internet sensation after his 'they didn't caught me' account of his arrest by policemen who accused him and others of engaging in homosexuality, has served an update on the case which has lingered for over a year.

The dancer called out the judges presiding over the case for adjourning the court dates without considering the stress the young men involved are passing through.

James Brown further revealed that he has always wanted to bring up the case on social media, but has been restrained by their lawyer.

He wrote " Hello masses. I’m literally calling the world, most especially Nigeria As a whole to listening to my cries....I am sure most of y’all still remember this 2018 case that made me went viral . Most of Nigerians think the case has died down but no it hasn’t , the shiiit is still going on,at the court .
"They keep Adjourning court date for over a year now. I need to Address this, so many of the Victims (us) are schooling in a far places, they just have to make it to court every slated date and yet the judges are not even seeing the stress , all these young men have dreams to chase but no way to Chase it cus of this ongoing case . Majority doesn’t even know the next things to do with their life’s .
"We are too young for all these pressure, btw we never killed anyone!!! I am tired, we are tired  and it’s frustrating I swear.... I’ve always wanted to bring this up on social media since last year but Lawyer didn’t let me, now I’ve taken permission to do so... We Need Nigerians to stand up for us, we don’t wish to continue this case again in next year HELP!!!!!!!!!!"

The 46 defendants arrested by the Lagos State Police command during an alleged gay initiation rites at a hotel in Egbeda were arraigned at the federal high court in the state on Tuesday November 5,  but Justice Rilwan Aikawa said the courtroom was too small for the arraignment of the 46 defendants.

He said he would have to adjourn the arraignment in order to get a bigger courtroom where the proceeding could take place. The case was adjourned till November 22.
Posted by makarella at 8:54 AM