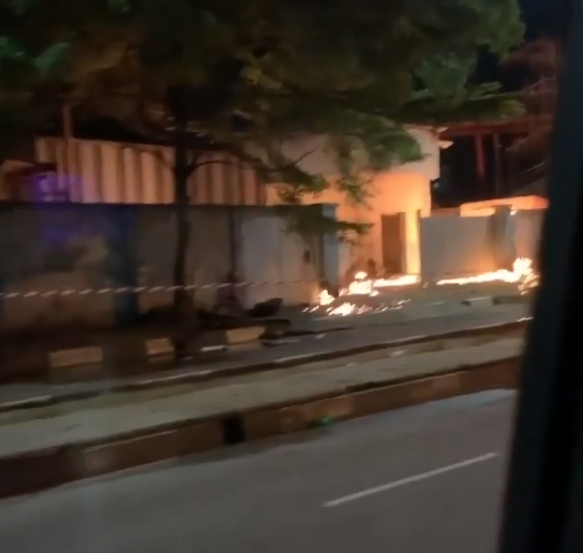 The Lagos Water Corporation in Onikan area of Lagos Island was on Thursday October 17, gutted by fire.

Officials of the Lagos State Emergency Management Agency (LASEMA) Response Team, Lagos State Fire Service, Federal Fire Service and Lagos State Traffic Management Authority (LASTMA) are reportedly on ground battling the fire which has been put under control and confined to a secluded portion of the complex.

Commenting on the fire incident, LASEMA Public Affairs Officer Nosa Okunbor said they have established a link betwee the fire outbreak and an unidentified gas pipeline which belongs to the Department of Petroleum Resources (DPR). The fire which is suspected to have been caused by an underground gas or petrol facility was reportedly ignited from different places on the ground inside and outside the Water Corporation complex.

The Nation reported he said “The fire was reportedly discovered to have ignited from different places on the ground inside and outside the water corporation complex. We have not recorded any loss of lives during the operation, nor has injuries been sustained.
“The combined efforts of the Agency’s Response Team, alongside Lagos State Fire Service, Federal Fire Service and LASTMA on ground have paid off in ensuring the situation is under control.  Though the suspected source of the gas leakage is still unknown, but LASEMA’s efforts on behalf of other Emergency responders are yielding handsome results.
“The development is attributed to the fact that the confined fire which was burning like a pocket fire will be put out finally on arrival of the gas pipeline vendors. While awaiting arrival of the gas vendors to turn off the gas pipes at its main supply, blanketing and dampening are still ongoing at the recovery operation.
“Having successfully controlled and confined the fire with ongoing blanketing and awaiting the final shutdown of the gas supply at source, road traffic has been diverted. All roads inwards Onikan have been effectively cordoned off from Awolowo road to militate against any secondary incidents while the ongoing recovery operation lasts."