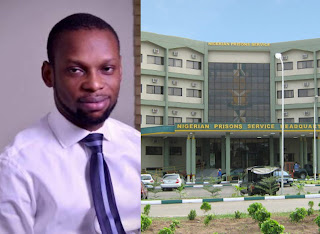 Fisayo Soyombo, the Nigerian investigative journalist who exposed the rot in Nigerian prison has confirmed that he went into hiding folllowing security operatives' move to arrest him.

The journalist adopted the pseudonym 'Ojo Olajumoke' as he spent two weeks in detention, five days in a police cell and eight days as an inmate in Ikoyi Prison to expose the rot in Nigeria's justice system in a three-part series.

Speaking to Sahara Reporters, Fisayo reportedly said he is wanted by the Buhari-led administration for exposing corrupt practices in the Nigeria Police Force and Nigerian Correctional Service.

His report which contained audio, pictorial and video evidence of corruption in the Nigerian judicial system, allegedly irked the Nigerian prison authorities especially the comptroller-general of the prison services.

The Guardian reported that Fisayo Soyombo was scheduled to speak at a workshop on fake news organised by Goethe Institute on Tuesday evening, but he pulled out of the event following threat of arrest.

“Prisons authorities are very angry and have decided to get the journalist arrested,” the source said.
“He is to be charged to court and prosecuted under Section 29 of the Nigeria Correctional Service Act.
Subsection 1 (d) of the Act states that a person is deemed to have committed an offence if he “procures or facilitates the procurement of communication devices for an inmate or makes conversation or aids the making of conversation through a mobile phone or other devices to an inmate other than as provided in the Correctional Standing Orders and other related correctional policies" a source said.

He has also vacated his residence where he just renewed rent and forced to go underground following a hunt allegedly launched against him by security operatives.
Posted by makarella at 9:16 PM