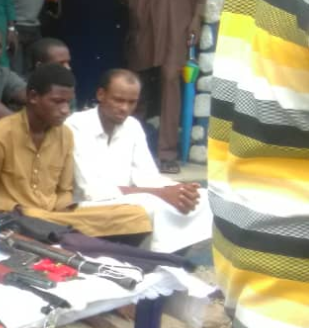 The Taraba state police command have arrested a 22-year- old student of the Adamawa State University Jalingo, Abdulbasid Umar, for kidnapping his ten-year old sister, Amina Umar and demanding a N10 million ransom from their father.

Parading the suspect before newsmen, the state police command spokesperson, David Misai, said Umar was nabbed with his accomplices, Sadiq Dalhatu Sani 21, and Abdullahi Habib 27, whom he had hired to abduct his sister. Umar demanded N10 million ransom from his father to release his sister alive but later reduced it to N4 million.

“The mastermind of the crime, Abdubasit Umar, who happens to be a biological brother of the victim (Amina Umar), had criminally conspired with other suspects and lured the innocent girl into a Blue Honda Hennessy car marked MKF 67JK Kaduna. They drove her to Dove Hotel in Mayo Dassa, where she was held captive.
The suspects contacted the family and demanded a ransom of 10,000,000 naira. The kidnappers later accepted to collect the sum of N4 million. In the process of collecting the ransom at Wuro-Sambe, an outskirt of Jalingo, they were tracked down and arrested. The victim was rescued.”

When interrogated, the suspect said

“My intention of kidnapping my younger sister was to get N10 million. My aim is to get the money and travel abroad.”