A 400-level student of the Jos NTA has reportedly committed suicide just few days to his final exams. 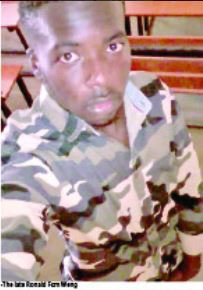 Life became bitter for Mrs Pauline Fom when she lost her husband three months after she gave birth to her only son, Fom Ronald Weng. Consequently, her hope was dashed, but her only consolation was that she has a male child who will take after his father.

Thus for 22 years after the death of her husband, Mrs Fom refused to remarry even when she was still in her youthful age. She had turned down suitors who indicated interest in her with the intention of looking after her son.

Her resolve and struggle were to make sure Ronald had a bright future that would enable him serve as the breadwinner of the family.

And in the last 22 years, Ronald gave the mother this hope.

But this was suddenly dashed on Friday, September 20, when Ronald took a decision to commit suicide one week to his graduation from NTA College Jos, leaving her mother in agony and hopeless condition.

Ronald who was quiet and soft-spoken completed his secondary school at the Collage of Immaculate Jos and got admission to NTA Collage to study Television Journalism.

Thus he had about five courses counting against him as carryover. But Ronald should not have taken that so serious as he had good reason having been sick and hospitalized.

His mother even went to the school to take up the matter with the authorities and was referred to Ronald’s course registration officer to help handle the issue.

The school demanded for the medical report of Ronald to enable them write ABU Zaria, the affiliate of NTA College Jos to formalise the deferment of the courses so that he could come back and sit for them to enable him come out with good grade.

When the mother couldn’t produce the medical certificate on that day, she begged the course registration officer and the examination officer to do their best to resolve the problem.

The widow thought the school authorities have handled the matter until Ronald went to sign his 400-level course registration form and was denied registration until the carryover courses of 300-level are resolved.

Ronald was said to be highly bitter throughout that day and couldn’t eat. He was said to have started to isolate himself from his associates in school as well as in the house.

The mother became worried and went to the school again and the matter was resolved that he would be allowed to write his final exams while the school formalises the deferment of those courses so that he would come back to write them later.

Ronald was writing his last semester examination without any problem, though he was hospitalized one week before the examination commenced. He had written four papers and was left with three papers to go.

Specifically, Ronald with matriculation number U15TJ1023, was in school on Thursday and wrote his examination without hitches and left home peacefully.

Sadly, on Friday, September 20, he told his mother that he wanted to eat rice and the mother joyfully rushed to the kitchen to boil some rice for him. At about 1:30p.m, Ronald went into his room to sleep and the mother went out to buy something.

But when she came back, she knocked severally on the door of the son, but there was no response. She turned to the window to look through, but couldn’t see well until she tore the net and saw her son, Ronald dangling on a rope.

The widow raised the alarm, which attracted people to the scene and the corpse was taken down and deposited at the Plateau Specialist Hospital, Jos.

Sunday Sun learnt that Ronald had borrowed a ladder from his neighbours one week before he committed suicide on the pretext that he was going to repair his light. Many believed that it was the ladder he used to tie the rope on the ceiling while he contemplated whether to take the decision or not until that fateful day.

The widow, who was devastated, narrated the chilling story to Sunday Sun on how she met the lifeless body of her only son dangling in the room.

“He was having malaria one week before he started his examination and he was hospitalized. He was taking drugs that was given to him from the hospital, but he complained that he was weak and feeling very dizzy and he was about to start exams and I advised him to stop the drugs to enable him read for his exams and when he finishes, he can continue with the treatment.

“He was writing the exams without problem and he came home on Friday 20 September, 2019 and he said he was very hungry that he wanted to eat something and I went to the kitchen to boil rice for him.

“I went out to buy something outside to cook the rice and he went into his room as if he was going to sleep, I didn’t know that he has planned what he did.

“When I came back, I was calling his name, he didn’t answer, and he locked the door, I knocked on the door and he was not responding, I went through the window and tore the net and I saw that he has hung himself. His body was dangling on the rope, I don’t know the confusion that came over him and I raised the alarm.”

Mrs Fom confirmed that her late son had some academic challenges, which he has been bothered about for sometime, but said that effort was on to resolve the issues.

The Course Registration Officer, Mr Kasim Jibrin said that the late Ronald was doing well academically and that he did not have any academic challenge that would have pushed him to commit suicide.

Jibrin noted that the challenges he had during his 300-level were being resolved. He noted that the school wanted to formalise the deferment of those courses so that they would not count against him as carryover.

“I know Ronald very well right from when he enrolled into the degree programme, he is somebody that has been quiet and isolated, always looking bored, but if you are familiar with such characteristics, it is something that serve as a pointer that the boy was faced with certain emotional challenges.

“You don’t see him with friends, he’s always isolated, he doesn’t have friends in the class except one 300-level student, if you see them with other students you will notice that they are people who are obviously abusing drugs.

“I don’t know about his challenges, initially when the mother came, she spoke with the Dean of Studies and said the boy has psychological challenges and they handed him over to me and told me to monitor him.

“The mother met me and said the boy came to register and I refused and I told her yes. I didn’t register him because I saw a whole semester counting as carryover against him and she said I should help her.

“I took him to the examination officer and I said is there anyway we can salvage his situation and he said the only thing is to formalise his deferment, that way those courses will not count as carryover rather as deferred courses and he can now come back as spillover student to write those courses so that he will be able to graduate with good grade.

“But that he should apply for deferment so that we can send it to ABU Zaria, we will formerlise it and he is going to receive a copy to show that he had deferred that semester, I will be able to attach his medical certificate so that ABU will now use that as evidence or criteria to grant the deferment letter.

“He was very happy and he was able to register those courses that were supposed to be carryover for him and they were lifted. He was so happy and excited; I was very surprised that the boy was smiling. He came and thanked me and the mum also called to thank me that he was able to write his exams, that was how he left until we got the unfortunate information.”

Mr Jibrin noted that based on his investigation, this was not the first time Ronald was abusing substances and that he was so isolated in the school.

“We got information that he was beating his mother at home and that was confirmed by a number of his friends who are close to him, that he beats the mother and she does his bidding, if he says this is what he wants, it must be done and that the mother realised he was under influence that was why she made efforts to salvage the situation.

“As far as I am concerned, he was doing well academically, he was on strong 2.2 points, so it couldn’t have been any academic issue apart from that deferment thing which was solved, he didn’t have a problem in school. He pays his fees, he has his course forms registered.

“The information that need to be verified was that he went to his neighbours to pick their ladder to go and fix electrical fault in his ceiling and they said probably that was when he went and hung the rope. They said he did that a week before we started our exams.

“The last time I saw him was on Thursday and on Friday there was no exams and we got the sad news. He was able to write all the four papers because we started the examination on Monday. He had additional three papers to write and eventually graduate, that was when he took that decision.”

Janet John, a student of Television Journalism who was close to Ronald said: “I know him, I am close to him to some extent, I wouldn’t know if he had any problem in school.

“I know him to be a very quiet person, he always walked with his earpiece and notebook, I remember a countless time that I walked up to him, but he is always listening to music.

“In some occasions, I will meet him facing the wall singing and I will say you are always doing this, when are we expecting the album and he will turn and smile and said don’t worry, very soon you will see it.

“He is not a troublesome person and always quiet. I got close to him when we had a group assignment, he always contributed, but he doesn’t talk when we are having group discussion to come up with ideas on how to handle the assignment.”
***
Source: Sun News
Posted by makarella at 2:57 PM