Sowore fulfills his bail condition, to be released soon 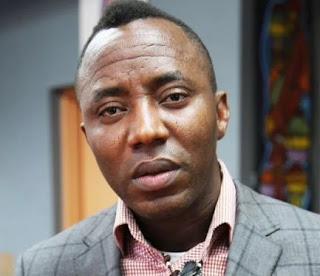 Omoyele Sowore, the embattled publsiher of Sahara Reporters, has fulfilled his bail conditions and will be released from the custody of the Department of State Security DSS soon. Sowore met his bail condition sthis afternoon.

Recall that Justice Taiwo Taiwo of the Federal High Court in Abuja ordered the release of Sowore after denying the application by the DSS to extend his stay in detention.

The judge, as part of bail conditions, asked Sowore to drop his passport with the court within 48 hours.

Sowore's counsel, Femi Falana, who is currently at the DSS headquarters, confirmed that the bail confition has been fulfilled and Sowore will be released soon.

“I am currently at their headquarters. Having complied with the condition given by the court, I am here for Sowore’s release,” Falana told Punch correspondent in a telephone interview

Posted by makarella at 8:01 PM