A horrific tragedy has been recently averted after Obasanjo's aide managed to disarm a drunken cop at Igbinedion's birthday. 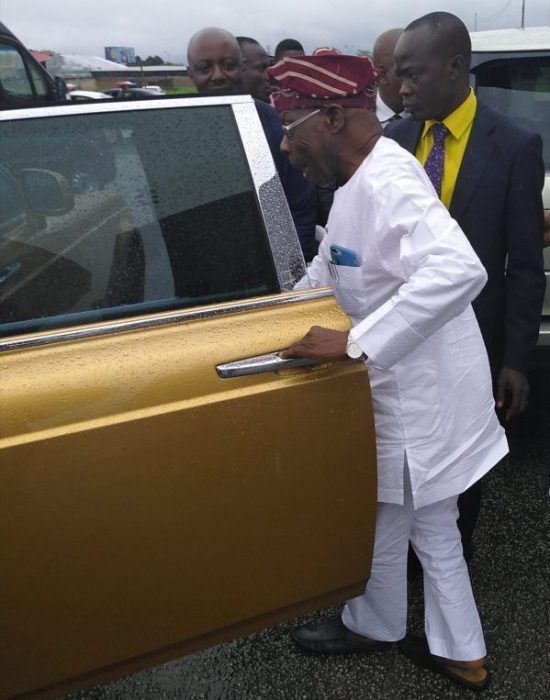 Obasanjo leaving the venue
PM News reports that tragedy was averted in Benin, Edo State, at the 85th birthday thanksgiving service of Chief Gabriel Igbinedion, when a police corporal allegedly brought out a pistol and threatened to shoot a civilian over what he called “official misconduct.”
The incident occurred at Saint Gabriel The Arch Angel Catholic Church, located along Sapele Road, Benin City on Sunday.

Eye witnesses said that a security detail attached to former President Olusegun Obasanjo, saved the day when he disarmed the gun-wielding cop who was suspected to be drunk.

The security detail said to be a Chief Superintendent of Police, was said to have ordered the arrest of the unidentified cop, after retrieving the pistol from him.

Speaking on condition of anonymity, a photo journalist who witnessed the drama, described the action of the drunk policeman as an embarrassment to the law enforcement agency.

“Everyone of us were watching him. Nobody could come close to him until the Assistant Commissioner of Police who came with Obasanjo to the venue, collected the pistol from him and quickly put it to safety before he ordered his arrest.

“There was tension and confusion everywhere. Thank God that the gun did not explode,” he said.
Posted by makarella at 12:40 PM