Chief Superintendent Abrokwa said there was a renewed campaign to weed out foreigners engaged in unlawful acts in the territory. 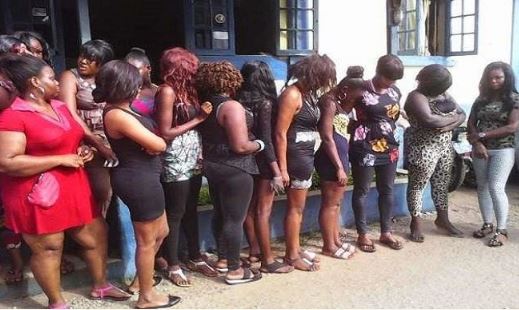 File Photo
The Ghana Immigration Service is set to deport 25 Nigerian ladies arrested in the Bono East Region of the country over prostitution.
Click Here To Download Our Android Mobile App

The Regional Commander of Immigration Service Department in the Bono East Region, Chief Superintendent Enoch Annor Abrokwa, told journalists that the girls will be deported to Nigeria as soon as the process was completed.
Their arrest followed the directive of the Regional Minister, Hon. Kofi Amaokohere to security personnel to rid the region of unlawful elements.
Chief Superintendent Abrokwa said there was a renewed campaign to weed out foreigners engaged in unlawful acts in the territory.
He said the prostitutes were arrested in the Nkoranza South and Kintampo South of the region when officers of the Immigration Service and the Ghana Police Service the area.
“Our men raided some notorious spots in the towns around 12a.m and 3a.m on the fateful day and picked about 25 prostitutes, all Nigerians,” he said.
The Immigration officer revealed that none of the girls had in their possession, any valid form of identification at the time of their arrest.

“None of the girl’s had any form of identification cards, such as Voter’s Identification card and Passports,” he said.
Chief Superintendent Annor said the Ghana Immigration Service will immediately commence the process for their deportation.
He sounded a strong warning to foreigners illegally residing in the region saying,” I want to use this opportunity to warn all foreigners in Bono East Region, who do not have appropriate documents to start packing, because the Immigration Service will come after them.”
A video recording captured some of the girl’s scantily dressed and soliciting for patronage from the officers.
Posted by makarella at 5:16 PM