The federal government's refusal to obey court order will spell doom for the country according to analysts. 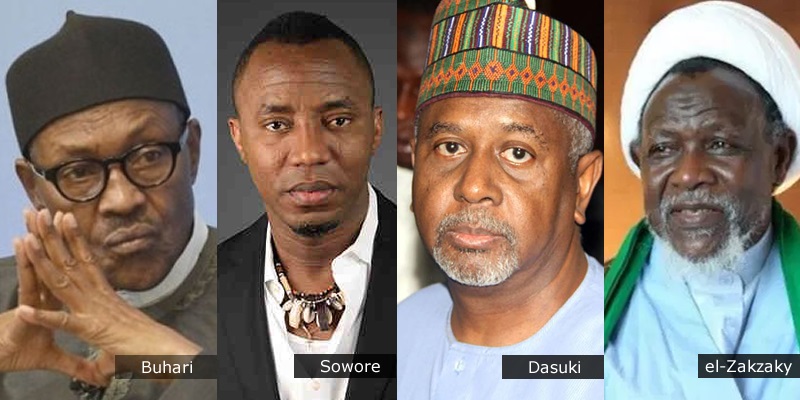 The refusal of the Department of State Services to release Omoyele Sowore , the publisher of SaharaReporters, an online news platform from its custody has brought to mind several other instances where the government ignored court orders.
From unlawful imprisonment to outright refusal to obey court directives , below are some of the instance where the President Muhammadu Buhari-led government has erred.
Omoyele Sowore
Omoyele Sowore , a former presidential candidate and publisher of SaharaReporters , an online news platform was on August 3 , 2019 arrested by the DSS in Lagos and transferred to Abuja .
The DSS obtained an ex parte order to keep Sowore for 45 days . Barely 24 hours to the expiration of the 45 days detention order , the Attorney -General of the Federation’ s office filed charges of treasonable felony , cybercrime offences and money laundering against him before the Federal High Court in Abuja .
Sowore ’s lawyer , Femi Falana applied for his bail pending his arraignment . Justice Taiwo Taiwo of the federal high court, Abuja granted the prayer.
Sowore has since filed a case of contempt against the DSS boss , Yusuf Bichi , for failing to comply with the court order granting him bail.
Ibraheem El -Zakzaky
On December 2 , 2016 , Justice Gabriel Kolawole of the federal high court in Abuja ordered the release of the leader of the Islamic Movement in Nigeria , Ibraheem El – Zakzaky and his wife , Zeenat from the custody of the Department of State Services .
As of the time of that ruling , El -Zakzaky and his wife had been in DSS ’ custody since December 2015 following an altercation between members of the Nigerian Army and the IMN in Zaria , Kaduna State .
Aside the order of the court to release them , the court also ordered that the DSS should pay the couple the sum of N 50 m as compensation.
This court order was disobeyed .
On August 5 , Justice Darius Khobo of Kaduna State High Court, granted El -Zakzaky , leave to seek medical attention in New Delhi , India .
The couple left for India and within a week were back in the country without receiving medical attention.
El – Zakzaky and wife are back in the DSS custody as of the time of filing this report .
The IMN leader is standing trial in another court over allegations of culpable homicide , unlawful assembly and disruption of the public peace among other charges.
Sambo Dasuki
Former National Security Adviser , Col . Sambo Dasuki is also one of the persons, who is still in custody , despite several courts ordering his release .
On Monday , July 2 , 2018 , the Federal High Court in Abuja granted bail to Dasuki from the custody of the DSS where he had been detained for two and a half years as of that time.
Delivering judgment in the suit filed by the ex -NSA in March 2019 , Justice Ijeoma Ojukwu ruled that his detention since December 29 , 2015 , amounted to a violation of his right to liberty.
Ojukwu ruled that the Federal Government ’s contention that Dasuki was being kept in custody on the grounds of his alleged threat to national security and his alleged ongoing investigation for money laundering did not warrant “ abrogating his right ” .
The judge also said that should the DSS have any further reason to interrogate him , the security agency could only invite and interview him between the hours of 9 am and 6 pm on working days .
Dasuki was picked up by operatives of the State Security Service in December 2015 . He was accused of illegal possession of firearms and diversion of $ 2 .1 billion from the arms deal contract .
The Economic Community of West African States Court of Justice on October 4 , 2016 , ordered his release from the illegal custody ; a judgement which the DSS had not obeyed .
Court order on debt limit
Another judgment, which the Federal Government may have disobeyed was the one made by the Federal High Court in Abuja directing the Federal Government to set the overall limits for the “ amounts of consolidated debts ” of the nation ’ s federal, state and local governments.
Justice Kolawole gave the judgment on February 20 , 2018 , in a suit filed by the Centre for Social Justice .
Justice Kolawole said it was mandatory for the government to set the debt limits as provided by section 42 ( 1 ) of the Fiscal Responsibility Act , 2007 .
He specifically ordered the Federal Government to set the debt limits , which should be approved by both the Senate and the House of Representatives within 90 days of the judgment .
The judgment has also yet to be obeyed.
Recovered loot
In March 2016 , Justice Mohammed Idris of the Federal High Court , Abuja ordered the federal government to publish details on the spending of recovered stolen funds by successive governments since 1999 . This order has not been obeyed till date .
Navy Captain Dada Labinjo
Navy Captain Dada Labinjo is allegedly being detained in the underground detention facility of the Defence Intelligence Agency in Abuja since September 12, 2018.
His lawyer , Mr Femi Falana , said though he obtained an order of the Federal High Court for his release , Labinjo has not been released .
Falana , who said this in an August 15, 2019, letter to the Executive Secretary, National Human Rights Commission, said Labinjo was just one of 67 persons, including foreigners, being illegally detained without trial by the navy.
Via: Punch
Posted by makarella at 3:23 PM