Two bank workers have been caught off-guard getting intimate while inside the office. 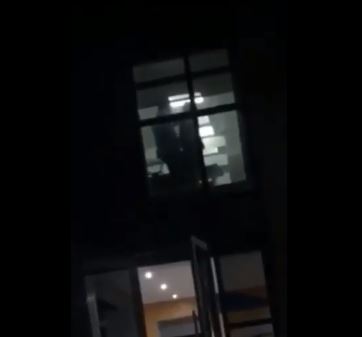 The two staff members
Two bankers alleged to be staff of Access Bank have been caught having an ‘intimate moment’ in an office after work hours over the weekend.
The incident was reported to have taken place at Access bank, its University of Lagos branch.
They seemed to have forgotten to pull down the window blinds before engaging in the act, which was captured on camera by residents of the area.
Sharing the video on Twitter, @Princeebuka7 wrote; “So away from the trending mike, tacha, frodd, seyi, tuoyo and the rest… Here’s what happened tonight live at @myaccessbank Unilag Please i day una, dnt sack them. Konji issa Bastard

“You all supporting them shows how shameless u all are and am sure this is what you do in your offices, no respect at all.”
However, some commentators on Twitter said it was wrong to upload such video while some stated that publicising the video could help the lady if she was engaging in the act on the basis of blackmail.
Watch video below:
Posted by makarella at 12:18 PM