A teenage nursing mother has revealed how she got pregnant for her brother who started sleeping with her at the age of 13. 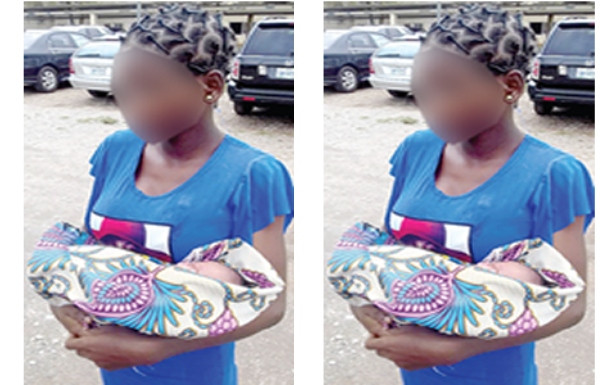 Blessing
A 15-year-old girl identified as Blessing, is currently nursing a baby which came from the incestous relationship her 35-year-old brother Frederick initiated when she was 13.
The repeated sexual abuse by her brother came to light, after she delivered a baby girl at Stella Obasanjo Hospital, in Edo State. Her brother reportedly took the baby away from her and abandoned her at  a refuse dump, claiming afterwards that she was dead.
Frederick now in custody of commissioner for Women Affairs was almost lynched by a mob, after the baby was found. Narrating her ordeal, Blessing said;

"My brother has been sleeping with me since I was 13 years old. Sometimes last year, he sent his wife out of their matrimonial home for about eight months. .

He sent her out, so that he could have his way with me on a daily basis. I had no one to cry to because he is my eldest brother. We lost our mum when I was 10 years old; this made me to stay with him. .
.
He promised to marry me despite all odds. He told me that I should not terminate the pregnancy. He said that once I was delivered of the baby, he would get someone to take the baby and we would become rich.”
Frederick on his own part said he started sleeping with his sister, after he returned home and saw her looking like his wife. News Telegraph reported that the rape suspect however insisted that Blessing was 17-years-old when he defiled her, and recently clocked 18 in January.
The baby and her mother were reportedly released to the officials of the Ministry of Women Affairs, after some documents were signed by both parties.
Posted by makarella at 8:12 PM