Horror! Plane With 62 Passengers On Board Collides With A Light Tower At Airport

A plane with as many as 60 passengers on board has collided with a light tower at a popular airport. 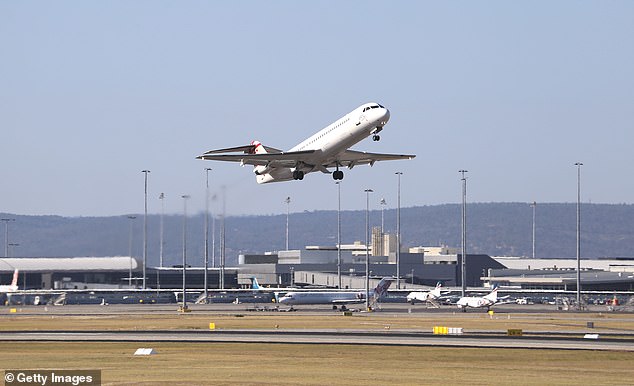 The Cobham Aviation plane collided with the structure as the plane was preparing to take off about 2.20pm on Tuesday (stock image of Perth Airport)
A plane with 60 passengers on board has hit a light tower at Perth Airport.

The Cobham Aviation plane collided with the structure as the plane was preparing to take off about 2.20pm on Tuesday.

Terrified passengers described feeling a 'massive jolt', as the aircraft hit the tower.
'Perth Airport can confirm a Cobham aircraft made impact with a light tower while taxiing in the general aviation area at approximately 2.20pm,' Perth Airport said.

'Emergency services are on site however there are no injuries to passengers or crew.

'This incident has not impacted any other operations or services at Perth Airport.'

The airline confirmed in a statement that the nose of the aircraft was damaged when it was leaving Cobham's ramp.

'None of the 62 passengers or four crew on board were injured,' the airline said.

'The aircraft was operating a regular afternoon service to the Goldfields region in Western Australia at the time of the incident.

'Cobham is currently working with all the relevant authorities and will fully co-operate the investigation.'

The plane was en route to Granny Smith Gold Mine, south of Laverton, when the collision occurred.
***
Source: Daily Mail UK
Posted by makarella at 12:45 PM