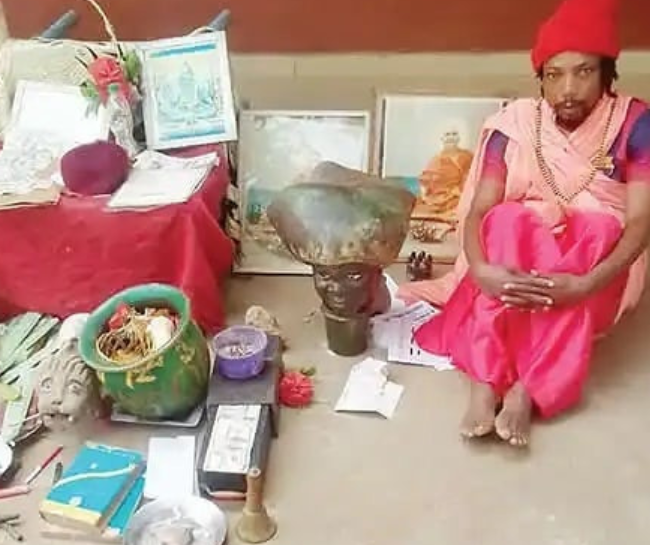 A fake Hindu monk identified as Raphael Ekechi, has been arrested by operatives of the Inspector-General of Police Intelligence Response Team in Ogun State for defrauding a second-hand clothes trader, Emmanuel Ekpe, of N167,000.

The 36-year-old trader had approached the magician for a business boom, but was given a substance which never worked. Ekechi was tracked down to Alagbado area of Lagos State, after the case was reported at the IRT office in Abeokuta on July 8, 2019.

The 50-year-old fake magician when paraded before newsmen, said he went into fraud after his electronics business failed. He said;

“I am from Izza in Ebonyi State and I have four children. One day, I travelled to Accra, Ghana, to buy goods worth N3m and Customs operatives seized them. I became frustrated and could not find any means to get money to continue my business.
“I found out that some Nigerians are desperate to get rich quickly and I decided to use my brain to get what I want. I lied to my clients that I had power and that I learnt metaphysical science from India.
“I charged N7,700 for consultation form and N1m for a person who wants to win a contract. The man (Ekpe) wanted to boost his business. I charged him N167,000 but he first deposited N57,000 and promised to pay the balance in a month’s time.
“I told him that he must pay fully for the things I gave him to work. He came back to my ‘office’ and complained that what I did for him did not work. I told him to stop complaining so that the gods would not be angry with him. I did not know he would report to the police.” 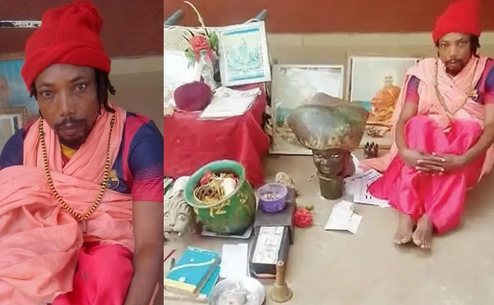 On his own part, the distraught trader said he sought for Ekechi's metaphysical power to save his crashing business.

“I am married with three children and I deal in second-hand clothes. I started from Katankowa Market, Abule-Egba, Lagos, before I moved to Kuto Market in Abeokuta. My business crumbled and I was desperately looking for what to do to revive it.
“I tried to secure a loan from many places but I did not succeed. I saw his (Ekechi’s) poster around Abule Egba area of Lagos and read that he had the power to boost business.
“I called him on the phone and he directed me to take a motorbike to Kola bus stop. He took me to his temple at Alagbado and gave me a consultation form which I filled. I told him that I wanted to revive my business.
“I paid N18,000 for a ring he gave me. He said I should do a sacrifice for it to work and he asked me to pay N120,000 but I deposited N80,000. He also asked me to pay N18,000 for ‘spiritual tax,’ and N35,000 for another sacrifice.
“I returned to tell him that I did not get results for what I paid for and asked him to refund my money. He refused and started to threaten my life. He refunded N53,000.”