It has caused serious commotion after he appeared from the bush and climbed atop one of the engines of an Azman Air aircraft. 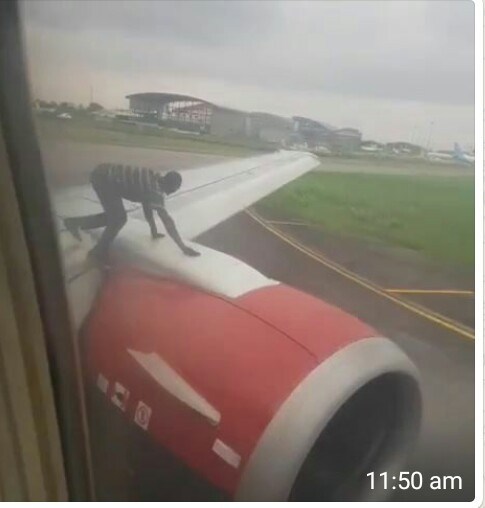 An unidentified man on Friday breached the security at the Murtala Muhammed International Airport Lagos and invaded the runway of the airport to prevent an Azman Air aircraft from operating.


The action of the man delayed the aircraft movement for about 30minutes creating fear and panic among passengers as relevant security officials delayed to show up and get the man apprehended.

An eyewitness (a passenger) who recorded the scene on a mobile phone showed the man climbing on top one of the aircraft engines.

“Passengers on board the aircraft panicked fearing it could be a terrorist as the man held a bag in one hand – the contents which were not known to passengers,” said the source.

Spokeswoman of the Federal Airports Authority of Nigeria (FAAN) in a short message sent to aviation journalists cleared the air on the incident assuring, “dear colleagues, the man has been apprehended by aviation security (Avsec) and he is in Tango City right now.”
Details of the identity of the man, his mission and most especially the state of his mental health were yet to be disclosed.
Below are videos of the man climbing on the plane:

Posted by makarella at 8:48 PM