Two suspected internet fraudsters and their charms arraigned in court 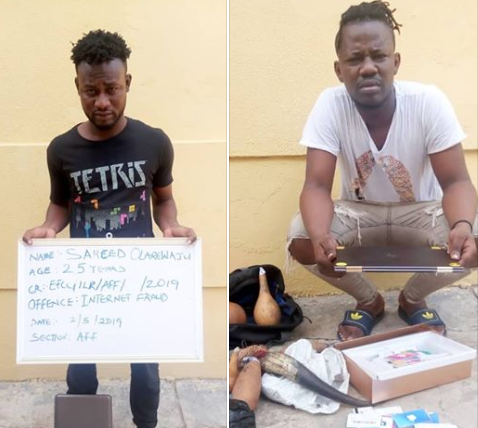 A statement from the EFCC says that during the trial, an investigator of Economic and Financial Crimes Commission (EFCC), Olamide Sadiq, told the court that on April 28th, based on reliable information concerning the suspicious activities of defendant about internet fraud, the operatives arrested the defendants at Ilorin International Airport.

The witness said that their phones were searched and it was revealed that the defendants created an email, using the name James kiak, with email address, captainjameskaik@gmail. Com; while “using the picture of a white man to deceive his unsuspecting victim". He said after analysing the e-mail and several other email correspondents between the defendants and their victims, one Brenda Hurling, it was revealed that it was scam mail.
The entire incriminating documents discovered from the defendants were admitted in court as evidence P1 and P2a. The IPhone was admitted as evidence P1, while the statement made by the defendant in April was admitted as P2a.
“The document was endorsed by the defendant, attached to the document is a certificate of identification,” Sadiq said. Also admitted as evidence is the printed out email transactions that transpired between the defendant and Brenda Hurling and the certificate of identification was admitted as evidence P2b.
The prosecution counsel, Mr. A. A. Adebayo, told the court that sometimes in April, Okuselu pretended to be an America woman, one Blessed Saviour, claiming to provide job to one Omni Guzman, in United States of America.
Adebayo said that it was contained in the accused person’s Gmail account; blessed.saviour000@gmail.com; email conversation with his victim.
According to the prosecution Counsel, Okuselu committed an offence, contrary to sections 95, 321 of the penal code law and punishable under section 322 of the same law. Adebayo said the defendants entered a plea bargain agreement.
After hearing the two counsels, Justice Oyinloye accepted the plea bargain and sentenced the two accused persons after they "pleaded guilty" to the charges brought against them by the EFCC.
Oyinloye said the sentence followed a plea bargain agreement, entered upon by the prosecution and defence counsel and the evidence admitted into court.
He further said that "following the accused acceptance of guilt; he therefore sentenced the accused person to 1 year in Oke-kura prison yard".
According to the presiding Judge "The sentence service will commence from April 28, when the accused persons were arrested by the anti graft body" and asked them to write an undertaking to the court, that they will never commit same offence again.
By makarella - June 08, 2019