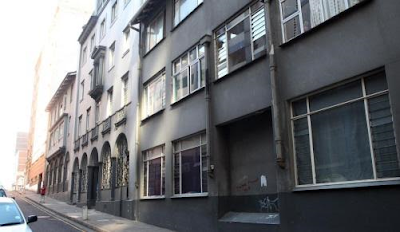 Members of the Hawks Drug Enforcement Bureau on Tuesday, July 26, raided a historic building in Durban's South Beach and uncovered a drug laboratory. The 90-year-old Pioneer Lodge, once a popular hotel is home to mostly senior citizens
Three suspects Chimezie Godwin Agwanihu, 35, Victory Uzoamaka Nnadi, 31, and Ifani Henry Nnadi, 26 were arrested at the scene. They have been charged with drug possession.

"They were also found in possession of a machine used to manufacture the drugs, 2kg of white powder and 750g of embalming powder suspected to be the ingredients of manufacturing drugs," said Hawks spokesman Simphiwe Mhlongo.

Police also found 4000 tablets with a Mercedes emblem suspected to be ecstasy. "The equipment and ingredients were seized. The street value of the drugs seized is about R250 000. All confiscated items will be sent to the forensic laboratory to determine the type of drug."
It is believed the drug manufactured is methamphetamine commonly known as meth, crystal, chalk, or ice. It is an extremely addictive stimulant in the form of a white, odourless, bitter-tasting crystalline powder.
It was also disclosed that drug dealers and manufacturers were tenants of flats in the area, and were using three or four of them for their business. The elderly residents said they were disappointed at how their “happy home” had become a nightmare to live in and said there was no vetting process for newcomers.

"Lately, there was a funny smell in the building. I wasn’t quite sure what it was but it did smell like strong chemical. We are old people and we just want to live peacefully here. We don’t know how such people are being let into the building without being vetted properly," said 60-year-old Pinky Karstn, who has been living there for 14 years.

She said she would often see people entering the building multiple times a day, and suspected they might be drug runners.

"Our suspicions were confirmed when the police raided them this week. We fear for our lives in such an environment. The building is meant for elderly people not for criminals," said 75-year-old Patrick Simon, who has been resident for 18 years.

The arrested Nigerian suspects appeared in the Durban Magistrate’s Court on Wednesday and were remanded in custody until August 11.
Source: Sunday Tribune
By makarella - July 31, 2016